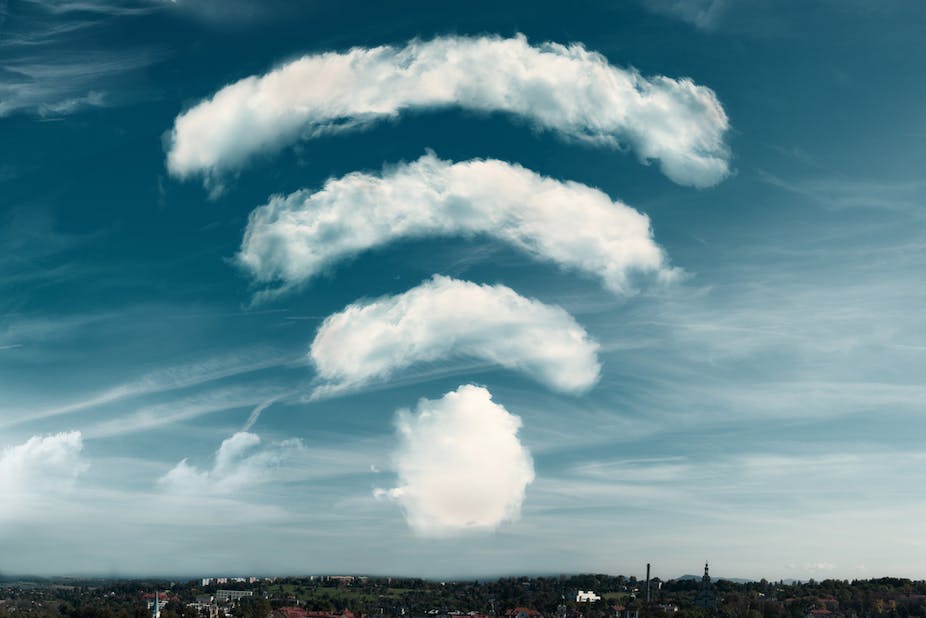 Studies show wifi, mobile phones and other sources of electromagnetic radiation don’t make us sick. So, why are some people convinced they’re electrosensitive? from www.shutterstock.com

In 2006, two researchers, Hallberg and Oberfeld, published a terrifying forecast in the journal Electromagnetic Biology and Medicine asking “Will we all become electrosensitive?”.

The researchers extrapolated figures from 17 reports published in 1985-2004 from nine countries to estimate how many people by 2017 would be sensitive to electromagnetic radiation from common household appliances, including mobile phones, and environmental exposures like power lines, and TV, phone and radio transmission masts.

According to their calculations, by now, half the world’s population would be suffering from electrosensitivity. That’s around 3.75 billion people, surely the biggest plague ever to affect the world.

And if we continue their extrapolation for a few more years, the researchers will have answered their own original question.

Electrosensitivity is not a disease recognised by any authoritative disease classification system. It is a self-diagnosed label adopted and promoted by people who believe they are sensitive to exposure to electromagnetic radiation from sources like power lines, electrical appliances, computers, cordless and mobile phones, wifi, smart electricity meters, dimmer switches, radio, television and mobile phone transmission towers.

Unless you live in the wilderness, you are surrounded by electromagnetic radiation. My suburban wifi network icon shows 10 networks near my house. And that’s just one source. For all this electromagnetic radiation, hypothesised increases in brain cancer have not occurred across Australia more than 29 years after the first mobile phone was switched on.

This news clip shows a tragic case of a woman who wears a cloth head cover she thinks will protect her from radio frequency radiation emitted from mobile phone transmission towers.

And here’s an electromagnetic fearmonger frightening an audience for over an hour about many sources of electromagnetic radiation while holding a wireless microphone next to his head.

A legitimate line of research

Those who study the phenomenon call it idiopathic environmental intolerance attributed to electromagnetic fields or IEI-EMF.

The acid test for those who claim these sensitivities is a provocation study. People who say they are harmed by exposure to electromagnetic or radio frequency radiation volunteer to be randomly exposed to actual, sham or zero doses of the agents, like wifi, they say are making them sick.

Two systematic reviews of all the published evidence from such studies have both found no evidence people saying they are “electrosensitive” really are.

However, the study participants could not correctly identify when they were being exposed to active electromagnetic fields. The authors concluded:

Despite the conviction of … sufferers that their symptoms are triggered by exposure to electromagnetic fields, repeated experiments have been unable to replicate this phenomenon under controlled conditions.

The second review from 2011 looked at whether exposure to electromagnetic fields triggers physiological or cognitive changes in people who say they are electrosensitive. It looked at 29 single or double-blind experiments where participants were exposed to different electromagnetic frequency levels, and their outcomes objectively assessed.

Most differences in symptoms between the groups could not be replicated or did not differ significantly between control and test groups. The researchers concluded:

At present, there is no reliable evidence to suggest that people … experience unusual physiological reactions as a result of exposure to electromagnetic fields.

In South Africa in 2010, a group of people who believed they were electrosensitive planned to sue a radio tower operator over symptoms over a six week period. But they didn’t know the tower had been switched off at the time.

Among the 17 “studies” on electrosensitivity Hallberg and Oberfeld listed were an estimate of 5% of the Irish population, published in something called “This is London”, and a Swedish estimate of 50,000 sufferers in 1994 attributed to “anonymous”, with no reference supplied.

More serious studies involving sample surveys of populations find around 4% of people at any one time say they are electrosensitive.

Evidence therefore points strongly to electrosensitivity and idiopathic environmental intolerance generally being “communicated diseases”, which spread by people hearing about the alleged dangers, and sometimes then worrying themselves sick.

This is the nocebo effect, where worrying about something causes the problems that may have been described or found on the internet.

Many people do indeed present with objectively measurable and observable symptoms, in what medicine has long understood as somatisation, where anxiety and distress manifest as symptoms that drive those experiencing them to seek help and reassurance they suffer from the effects of some noxious external agent.

When Oberfeld spoke about his forecasts to a meeting, even before he could begin, reportedly:

… Several people had to leave the Carmelite Centre in Dublin’s Aungier Street, claiming discomfort from the toxic atmosphere generated by the concentration of cell phones and electromagnetic frequencies just a short distance from the capital’s premier shopping street and St Stephen’s Green”.

One of these operating in Australia is Geovital Academy which stands ready to extract cash for paint, mats, mesh and matresses supposed to shield. Tin foil hats are not in their catalogue.

From at least May 8, 2012 until May 31, 2013 the Wayback Machineshows Geovital had a supportive statement from Noble (sic) Prize winner Ivan Engler talking about the dangers of “geopathic stress”.

With almost all of my (roughly 300 patients) with a cancerous disease, their bed was placed for years on an energetically unfavorable place in a Geopathic Zone”.

No one called Ivan Engler has won a Nobel Prize in any category. But he may have won a Noble prize, whatever that might be.

sales
Previous Post 10 Shocking Facts about the Health Dangers of Wi-Fi Next Post WiFi Radiation: An Invisible Threat to Your Health?
Menu
Homepop